SANTA took time out of his busy schedule this morning (Friday) to deliver some festive cheer to Shetland on board the Sumburgh based coastguard helicopter.

In the annual fly-by no reindeers were needed as he travelled up the west of Shetland after leaving the helicopter base at 9.30am. It is due to go around the isles, returning back on the east side.

The helicopter did not got further north than Brae due to an impending crew change, and staff were due to assess flying hours and light before deciding whether to try the areas that were missed.

But the helicopter was soon after tasked to attend an emergency in Orkney – meaning it is “unlikely” Santa will continue his tour.

The ho-ho-helicopter has taken Santa on board every Christmas Eve for the last number of years, with the man himself standing at its open door to allow for optimum waving.

Highlighting that call-outs can happen at any time, the helicopter crew were scrambled to an emergency medical incident offshore shortly after dropping Santa back off at Sumburgh following the flyover in 2019. 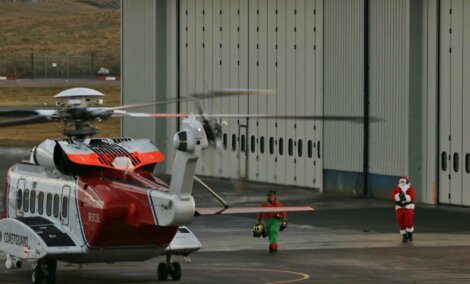