SHETLAND Islands Council (SIC) has insisted that it has no role in helping to facilitate change to the way Lerwick Up Helly Aa is celebrated and reiterated its view that the authority is not in breach of equality legislation by allowing the festival to use public sites around town including the town hall.

Both council convener Malcolm Bell and chief executive Maggie Sandison were quick to respond to a protest staged outside Lerwick Town Hall this morning, the last Tuesday in January, the day the famous fire festival would have taken place had it not been postponed for a year due to Covid-19 restriction.

Bell however suggested that the current break in the festival timetable could be used “constructively” by starting a dialogue between both sides. 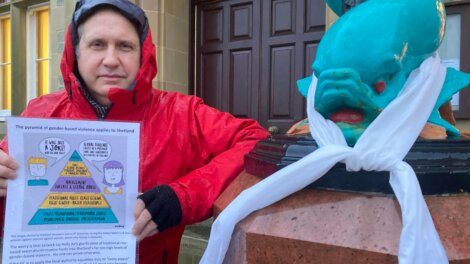 Gender equality campaigner Peter Hamilton says he will report the SIC to the Scottish Human Rights Commission should the authority continue with its stance which he believes breaches the equality act in that it actively discriminates against gender and reinforces harmful stereotypes which ultimately lead to violence against women.

Contrary to the recent photos seen nationally of male and female Vikings from Shetland’s South Mainland Up Helly Aa (SMUHA) parading through Glasgow to mark the opening of the Celtic Connections festival, only men feature in the torch bearing squads of the Lerwick Up Helly Aa, the most famous of the fire festivals.

Later on Tuesday, Up Helly Aa for Aa, a group campaigning for gradual change by allowing girls and women to become squad members, has asked its supporters to gather at the galley burning site in King George V play park to ‘reclaim’ the site. 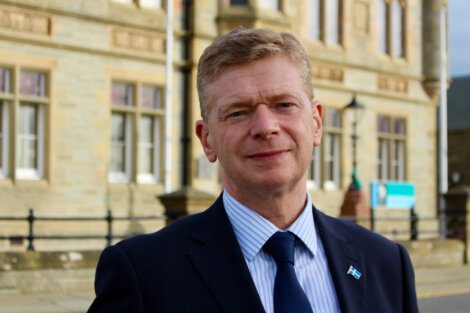 Convener Bell said that Hamilton had every right to make his protest peacefully.

He said: “The council does not sanction Up Helly Aa, does not control it and cannot dictate or change the constitution of another body.

“The council is not in breach of its equalities duty. We have repeatedly made that clear.

Bell added: “Up Helly Aa is a community festival and doubtless it will change when the community is ready to change it.

“I personally do not care who takes part in Up Helly Aa but, in the abstract, should anyone be prevented from taking part in something purely on the basis of their sex then clearly the answer is no. Again I have said that repeatedly.

“Perhaps the current postponement of the festival due to Covid is an ideal opportunity for both sides in the debate to engage constructively with each other.”

Hamilton said: “Gender-based violence in every community is going to need action by men in each community to fix. I am sure convenor Bell privately agrees, even though publicly he says human rights and equalities can be delegated to ‘the community’.

“To keep in line with the 2010 Equality Act, Shetland’s Equality Outcomes Progress & Mainstreaming Report 2021 – 2025 requires the council to ‘eliminate discrimination’.

“So the way forwards for the council is simple. Instead of having a civic ceremony to endorse this sexist celebration, the convenor needs to invite the UHA committee into a meeting, and they need to accept that invitation.

“It is his hospitality they have come to enjoy, and it is his position they must respect.” 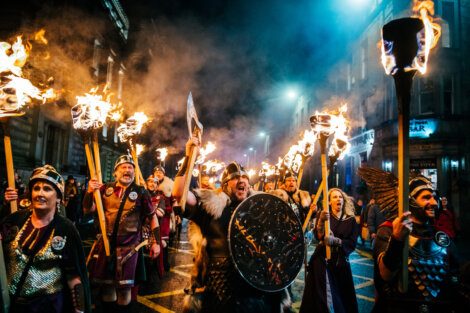 Male and female Vikings from SMUHA parading through the streets of Glasgow on Saturday. All photos: Gaelle Beri