ORKNEY and Shetland’s Valuation Joint Board (VJB) have today (Thursday) viewed a report which said some of the actions it carried out were ultra vires and unlawful.

The board, which is made up of councillors from both local authorities, looks after the valuation roll and the council tax valuation lists for the two council areas. It is also responsible for the maintenance of the Register of Electors. 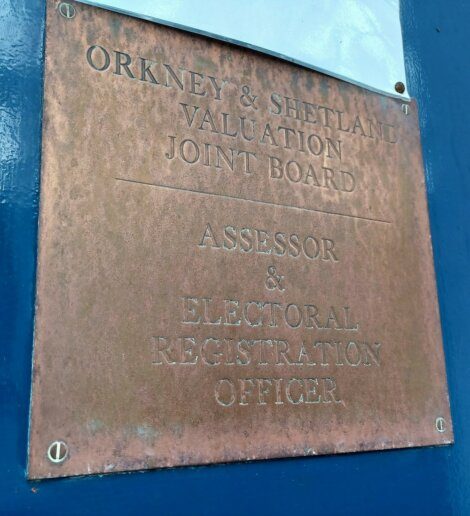 Board members discussed a recently released audit report from external auditors Deloitte, which said the board’s leadership team overstepped their authority and even acted unlawfully.

In 2020, it was widely reported that there had been a disagreement over a possible significant pay rise for its assessor Dennis Stevenson.

It’s understood that this led to a spate of resignations. Orkney councillors John Ross Scott and Dr Stephen Clackson both resigned from the board, following on from the departure of Shetland councillor convener Malcolm Bell, all in 2020.

The report says the assessor in question had wanted to retire and there had been difficulties finding someone to fill the roll. An increase in salary was then discussed to encourage the assessor to stay. This would have allowed the VJB to continue functioning until a replacement assessor was found.

However, the report says that this was outside the powers of the board’s leadership team. It says this exposed the board to financial, reputational and workforce risks and was unlawful.

Today, the board’s chairman Orkney councillor Andrew Drever opened the item by shouldering his share of the responsibility for the issues brought up in the audit.

He said: “I feel I have to take some responsibility in part for the issues raised. Namely that it was myself that originally instigated the involvement from both Orkney and Shetland islands council chief executives at a time when I required a steer, as I believed the board could be heading towards a failure to protect statutory duties.”

He said this failure would have then led to responsibility being with the local authorities to rectify.

Shetland councillor Allison Duncan said he was “very disappointed” with the report. He said he was “totally embarrassed that it has come to this, and it is certainly a spectacular own goal”.

However, the consensus among the rest of the board members was that they were all culpable. Orkney councillor David Dawson said seeing the terms “ultra vires” and “unlawful” chilled him to the bone.

However, he and other board members shared the view that what was done, was done to avoid a “major crisis”.

He said: “Leadership was invested in the entire board. We all have to share some degree of blame for this.

“At the time, in regard to the informal meeting, we were facing significant and serious challenges which, if they had become a reality, we would have been facing a far worse crisis than we have today.

“The leadership team did what they believed to be right at the time. We were more than happy to comply and to be complicit in it. It certainly raised questions.”

It was obvious that there was some confusion about the remit of local authorities in the VJB and how the board gets its legal advice.

Drever admitted he was “very confused” with the details of the most recent audit report and the one before that around these issues. This was echoed by other board members.

He suggested that the constitution could be re-written to address issues around the leadership of the board and its relationship with the isles’ councils.

Vice-convener of the board Theo Smith said the board has “failed in their duty but in defence of that, I’m not sure we knew exactly what our duty was”.

The findings of the audit were noted and accepted by the board.