Ahead of May’s local government election, modern political history PhD student Mathew Nicolson looks at the role party politics has played in council elections over the years. And although there is an increase in the number of candidates on a party ticket, his verdict is clear that those with a party affiliation take a high risk of not being elected. 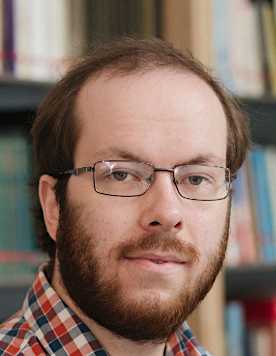 Mathew Nicolson is a PhD student at the University of Edinburgh.

On the 5th of May voters across most of Shetland will cast ballots to elect the next Shetland Islands Council, the 12thelection since its establishment in 1974.  As in the other islands councils, elections in Shetland operate very differently to those across much of the Scottish mainland and can often be difficult for outside observers to understand.  Dominated by independent candidates, there is no ‘administration’ grouping seeking re-election nor an ‘opposition’ bloc hoping to unseat them.

National coverage focusing on which parties are up and which parties will be punished by voters is almost meaningless.  With a distinct and intensely local way of going about politics, the election in Shetland very much needs to be understood on its own terms.

Unfortunately, not everyone will have the chance to decide who will represent them over the next five years.  Two wards – North Isles and Shetland North – have gone uncontested, with the North Isles not even having enough candidates to fill all the seats, requiring a by-election in due course.

In a sad sign for local democracy, nobody north of East Burrafirth will be able to take part in the election.  Even though the total number of candidates is up slightly from 2017, they have proven to be much more unevenly distributed this time round – just under a quarter of all candidates are competing for two seats in Shetland West alone.

Uncontested seats are nothing new for Shetland.  Back when we used the single-member First Past the Post system they were a regular feature of local elections.  In 1982, for instance, only nine out of 25 seats actually held a vote.  The introduction of Single Transferable Vote in 2007, which sees voters rank candidates in order of preference to elect multiple councillors per ward, led to a dramatic improvement in the number of electors able to cast a vote, initially allowing every voter to cast a ballot for the first time.

Even with two uncontested wards this year, more voters will be able to participate than in any election held under First Past the Post.  Nevertheless, this clear trend must raise questions about the barriers that stand in the way of running for public office. 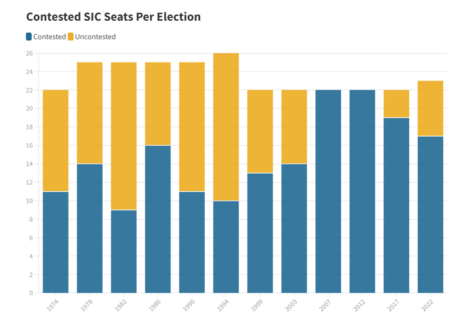 Many Shetlanders have an aversion to the presence of party politics in local elections.  The phrase ‘there is no place for party politics in the council’ has been repeated more than once already in this election, including by a candidate who formerly stood under a party banner.  Generally speaking, voters in Shetland value the individual – their character, background and experience – over any party affiliation.  Since 2007, candidates running for parties have been much less likely to win election than independent candidates.

Parties have long had a presence in Shetland’s local elections, however.  In the first years of the council a Labour group occupied a small corner of the council chamber, including well-kent faces such as Alex Morrison and James Paton.  The pro-autonomy Shetland Movement’s decision to field candidates in the 1980s and 1990s provided further party colour to the council, as did a sustained attempt by the Liberal Democrats to set up a grouping in the 1990s and early 2000s. 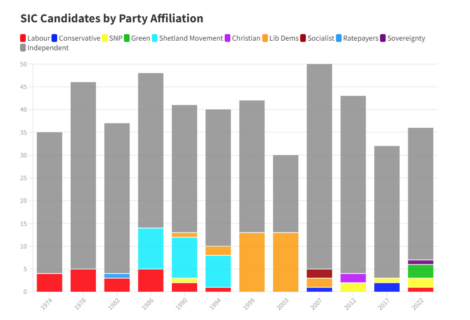 Yet, even when parties have formed sizeable groups in the council, they have never truly been able to overcome Shetland’s tradition of non-partisan politics.  Councillors elected as party members often slot into the patterns of their independent colleagues once elected – the Shetland Movement was often frustrated by the failure of its councillors to follow a stronger ‘party line.’

And the influence of what was sometimes criticised as a ‘clique’ of Liberal Democrat councillors between 1999 and 2003 has been cited as a reason for the party’s dramatic losses in the 2003 election.  These respective failures led to parties largely retreating from local politics, with elections since 2007 utterly dominated by independent candidates.

There are some signs that a comeback for political parties might be taking place.  Seven candidates this year are running with the backing of a party, the highest figure since 2003.  The Scottish Greens, contesting their first SIC election, leads the pack with three candidates, followed by two SNP candidates, one Sovereignty candidate and, contesting an election for the first time in 28 years, one Labour candidate.

Robbie McGregor’s uncontested victory in 2017 provided the SNP with its first ever representation on the council, while Tom Morton’s uncontested win in Shetland North this year has confirmed a Labour presence for the next five years.

Electoral arithmetic also guarantees at least one party candidate will be elected in Shetland South, either Robbie McGregor or the Greens’ Alex Armitage – or possibly both.  The next council will as a result have the largest party presence since 2003.  Still, this comeback will not substantially alter the council’s non-partisan character, even in the unlikely event that every party candidate is successful next month.

The predominance of independents helps focus the election campaign towards the local ward level, as the absence of joint manifestos – with the notable exception of the Greens – makes it difficult to conduct a Shetland-wide policy debate.  That said, the campaign has produced common issues and priorities.  A clear majority of candidate statements submitted to Shetland News have prioritised the cost-of-living crisis, fuel poverty and housing, with the need for fixed links and economic development also featuring heavily.

According to a recent survey conducted by The Shetland Times, these priorities align with voters’ concerns.  Fuel poverty, fixed links and housing were all identified among the top four concerns for people in Shetland.  Only digital connectivity, the third highest priority among respondents, has been somewhat neglected by election candidates.  Despite the Shetland Islands Council’s policy of ‘self-determination’ approved in 2020, neither candidates nor voters appear to have much interest in constitutional change, much less full autonomy – which ranked second to last on The Shetland Times’ survey.

Whereas most councils in Scotland will see negotiations after the election to decide the composition of the next administration, often a coalition of multiple parties, the process in Shetland will continue to be non-partisan and therefore somewhat unpredictable.  There are many vacated positions to fill, including the council’s next convener and leader as well as several committee chairs.

As the central election themes have shown, the new council leadership will have many challenges on its hands over the coming five years.  It will have to respond to rising fuel poverty and intense demand for housing, while residents in the North Isles ward and Bressay will be looking for real progress on fixed links.  This election is the best opportunity Shetlanders have to make their voice heard on how Shetland will be governed for the next five years.