THE TRADE of bringing drugs to Shetland via a variety of routes has “quietened down”, according to the islands’ police area commander.

Chief inspector Stuart Clemenson said that following a number of high-profile drugs hauls in recent months and a regular police presence at the islands’ entry points, it appears there are fewer drugs in circulation. 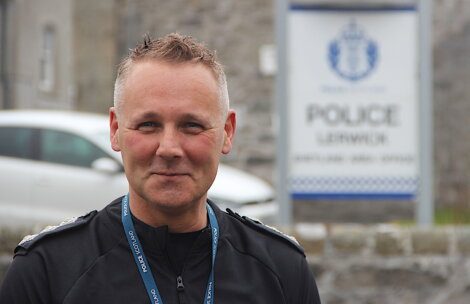 He also dismissed widespread suggestions that the drug dogs used in detecting illegal drugs are only able to discover cannabis and not harder drugs such as cocaine and heroin.

“We are not seeing that, even if that’s what people are saying. The drugs dogs are picking everything up, they are drugs dogs and not cannabis dogs, they pick up a variety of different things,” he told Shetland News.

“Dogs respond well to cannabis because of the strong smell but it is not correct to say that the dogs can’t detect other drugs such as cocaine or heroin.

“We have seen that the drugs detection at the post office and the other sources have dropped.

“It sounds at the moment that – touch wood – the message has got out there that we are proactive and that we are able to stop [the flow of drugs]”.

He added that thanks to good intelligence from the community as well as from transport operators such as Loganair and NorthLink, police have reduced the amount of drugs available locally. “We have stopped drugs coming in, but we also taken them out of circulation,” he said.

The chief inspector said drug couriers have been coming up with some innovative efforts to avoid detection.

“We see some really innovative and clever ways in which people package up the drugs (such as) wrapping them in cling foil, putting them in tubs and covering them with curry powder,” Clemenson said.

“You can wrap the stuff as many times as you want (…), the drugs dogs are still smelling it.

“And it’s not necessarily just the drugs; that person then is touching the drugs when packaging up, and the drugs dogs can pick up the smallest scent.

“We have seen some really innovative ways of people trying to get drugs to the islands and we are still finding it.”