A PROTEST was held at the Market Cross in Lerwick on Saturday morning against the “ugly world” of gillnetting in the fishing industry.

The event was organised by members of the Fishing Forward UK group, which wants to see greater ecological, social and economic sustainability in the UK catching and processing sectors.

Organiser Arlene Robertson said the hope was to instigate the banning of industrial gillnetting in boats over 15 metres because of the “endless destruction and cruelty to marine life and birds”, including in the waters around Shetland.

A larger protest march is also being planned for 1 October.

Around 20 people took their place at the Market Cross when the protest kicked off at 10.30am.

Some of the placards held up included photos of animals trapped and killed in netting. 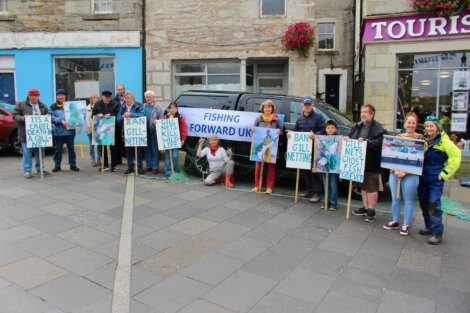 The only councillor present when the protest began was local Green member Alex Armitage. In June the party and the local fishing industry formed a somewhat unlikely alliance to call for action on gillnetting.

He said these nets are “curtains of death” which cause “unacceptable rates of entanglement”.

The issue is long-running and centres around European boats that use gillnets.

Gillnetting uses huge monofilament plastic nets that cover vast areas of sea and are designed to catch everything swimming in their vicinity, often resulting in the entanglement of sea mammals and birds.

The nets are generally discarded in the water after use, posing a continued threat both to wildlife and to shipping traffic. The nets are regularly dragged up by local fishing vessels.

There are also concerns that gill netters squeeze out local boats from their traditional grounds to the west of Shetland.

Robertson – who has family working in the industry – claimed that four weeks ago, for the first time, an EU-owned boat brought ashore four skip loads of discard at a Scottish port. 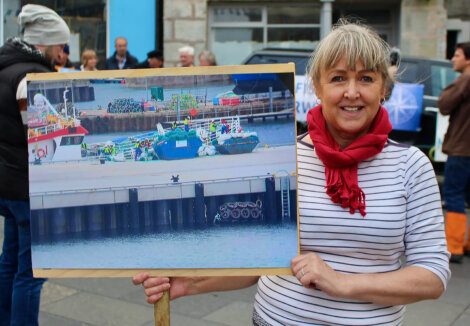 “Traditionally that has been thrown into our waters for decades,” she said.

Armitage said “artisanal gillnetting” practised by small boats under 15m is not a problem.

“Our grievance is with large-scale industrial gillnetting, and this is why we are calling on the Scottish Government and minister for rural affairs Mairi Gougeon to ban the practice of gillnetting in boats over 15m in Scottish waters,” he added.

Armitage also said he is keen to defend the marine environment as well as stand up for a sustainable fishing industry – adding that he is excited to be part of the “new cooperation” between the Greens and fishers. 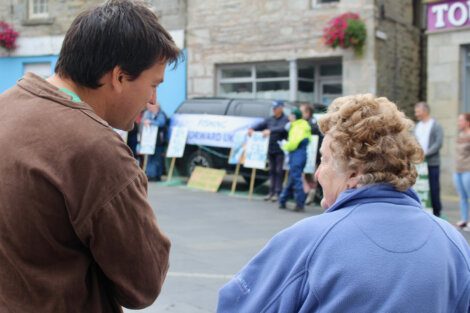 Shetland councillor Alex Armitage (left) at the the protest on Saturday.

Shetland Fishermen’s Association (SFA) was not involved in the protest, but its executive officer Sheila Keith said local crews are encouraged by seeing these type of events taking place.

“The sheer scale of intensive gillnetting carried out by visiting vessels around Shetland continues to have consequences for the economy and ecology of our islands,” she said.

“SFA members, environmentalists and the wider public have made constructive and concrete suggestions to the Scottish Government through its recent future catching policy consultation.

“Having asked for views, and having been left in no doubt about the strength of feeling in our community, ministers can no longer abdicate responsibility over these shared concerns.”