THE SHETLAND Public Protection Committee (SPPC) has just published its annual review, highlighting how local agencies have worked together to ensure the safety of children, young people and adults during the last year.

Committee chair Tam Baillie said: “The response from staff at all levels was truly exceptional.

“While it took a bit of time to fully adjust to the initial lockdown, staff and services flexed to be accessible throughout, changed routines to fit new circumstances and pulled together in a way that was remarkable.”

The annual report can be downloaded here.

A PROJECT to help remove harmful litter from the seas and raise awareness of its environmental impact is set for expansion after receiving almost £180,000 from Marine Fund Scotland.

The Fishing for Litter project, launched by KIMO in Shetland in 2005, is part of an international movement to support the removal of marine litter from fishing areas.

The scheme has grown to include 20 harbours, with more than 280 fishing vessels collecting 1,844 tonnes of marine litter.

It now aims to grow further with a target of landing at least 150 tonnes of marine litter a year, recruiting another 30 member fishing vessels and adding a minimum of three participating ports.

Cabinet secretary for rural affairs Mairi Gougeon said: “This funding demonstrates our commitment to reducing plastic pollution as part of a suite of wider measures which includes action on single-use plastic products.”

The service will be held online on 12 November 2021 at 12 noon and all are welcome to join.

Director of business development and deputy CEO Ali Godfrey said: “We are a charity deeply rooted in our Christian faith and so it is appropriate for us to recognise this and to give thanks for the work that we have undertaken in the past 140 years and the continuation of our work into the future.”

More information on the service can be found here.

Meanwhile the Mission has also produced an eBook which looks back to the early days of the charity as well as focussing on its work today of caring for UK fishermen and their families.

People can also leave an anniversary greeting for a donation. The eBook can be found here. 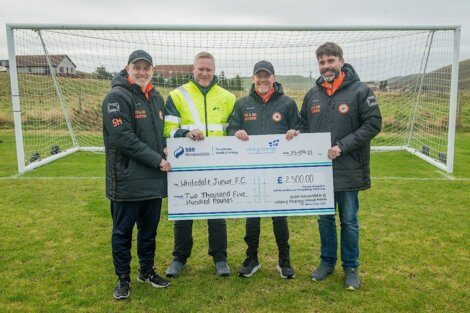 VIKING Energy has donated £2,500 to the Whitedale junior football club.

The club plan to buy a set of wheeled goal posts with the donation.

Viking Energy quantity surveyor Andy McAlpine said: “We’re keen to support the local club as they are neighbours to where our wind farm construction is taking place.

“Whitedale Junior Football Club has a huge membership which offers a fantastic opportunity for young people in the area to get involved and keep fit.”

The party’s stance came after a policy motion at its conference at the weekend.

Shetland Greens co-coordinator Debra Nicolson, who supported the motion, said: “Greens have been supporting the case for local air traffic control in Shetland and throughout the Highlands and Islands for several years now, since HIAL’s centralised air traffic management scheme proposals first emerged.

“The transport minister and the chief executive of HIAL have not been listening to the opposition against these proposals which have come from employees, trades unions, political parties, islands councils and communities. It’s time for this to be reviewed.”

Aviation policy is not part of the Greens’ recent cooperation deal with the SNP – except in respect of “island aviation connectivity and HIAL”.

APPLICATIONS are being sought for a three a half year PhD opportunity which will explore how the Scottish Government’s islands plan translates into actions to benefit communities.

The UHI project will also look at to what extent the plan responds to the aspirations expressed by island councils through the Our Islands Our Future campaign.

The studentship will take place through the UHI’s Institute for Northern Studies.

More details can be found here.