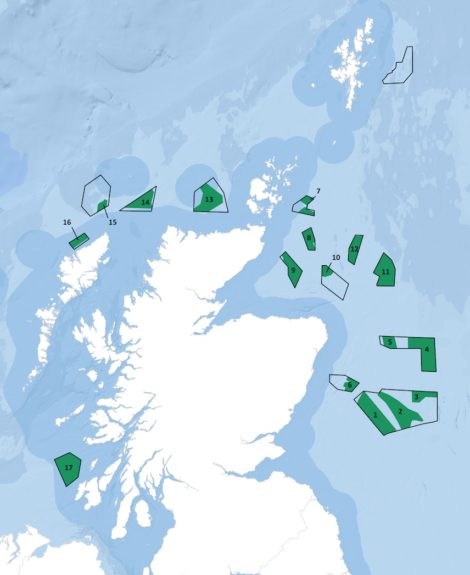 The 17 successful projects announced by Crown Estate Scotland on Monday.

THE local fishing industry has expressed relief after it emerged that a large area to the east of Shetland is – for the time being at least – not going to be developed by the offshore wind industry.

Concern has been expressed that the rush to develop large offshore wind farms around the Scottish coast could block vital access to rich fishing grounds and undermine the viability of the fish catching sector.

Seventeen successful projects to develop offshore wind farms were announced on Monday morning by Crown Estate Scotland as part of the first ever Scottish licencing round.

Crown Estate Scotland (CES) said some interest was shown in a designated large area to the East of Shetland (NE1) but no applicant was successful in securing a lease.

There were 74 applications for the remaining, less challenging, sites nearer the Scottish coastline. A total of 17 projects, with a potential output of almost 25 gigawatts, received licences.

Shetland Fishermen’s Association executive officer Sheila Keith said there was concern about other projects proposed for the waters off Shetland and fishermen’s voices needed to be heard.

“We are relieved with the news that there will be no development in the fishing grounds closest to Shetland,” she said.

“However, we are aware that other developments are being discussed and we will continue to make the case to protect Shetland’s world class fishing grounds for future generations by working with the government and potential developers for successful co-existence of both fishing and renewable energy projects.”

Keith was referring to the Cerulean and Aker Horizon proposals to the west and the north of Shetland which both envisage producing energy to power oil industry installations and to produce large amounts of hydrogen.

Shetland Islands Council chief executive Maggie Sandison said that due to the challenging location it was no real surprise that no applicant had been successful for the NE1 area.

She said she expected further licencing rounds to be held in the future, and the time until then should be used to secure Shetland’s interests in this new industry.

“There was a sense for me that Shetland waters may not be as popular for early developments through ScotWind just purely [because] they are more challenging to develop because of the water depth,” she said.

“It is likely that this is the first phase of a number of decades of development, so it is important that the council gets the time to make sure that the issue of how Shetland is to benefit gets addressed (…) looking at the impacts on the environment, the fishing industry, and how the wider community is impacted by such developments.

A CES spokesman said that, although there was no successful applicant for the east of Shetland site, it was important to note that this was not necessarily the end of the road for the process.

“It could be that an opportunity comes up via a clearing process,” he said.

The spokesman added that CES expected to announce the design of its INTOG [Innovation and Targeted Oil and Gas] leasing round, under which developers are invited to apply for projects designed to decarbonise the oil and gas industry.

Shetland fishermen have already expressed reservations and called on government to follow due process when it comes to listening to all stakeholders.

CES chief executive Simon Hodge said: “In addition to the environmental benefits, this also represents a major investment in the Scottish economy, with around £700m being delivered straight into the public finances and billions of pounds worth of supply chain commitments.

“The variety and scale of the projects that will progress onto the next stages shows both the remarkable progress of the offshore wind sector, and a clear sign that Scotland is set to be a major hub for the further development of this technology in the years to come.”

Should any application not progress to signing a full agreement, the next-highest scoring application will instead be offered an opportunity.

The 17 successful projects are as follows: 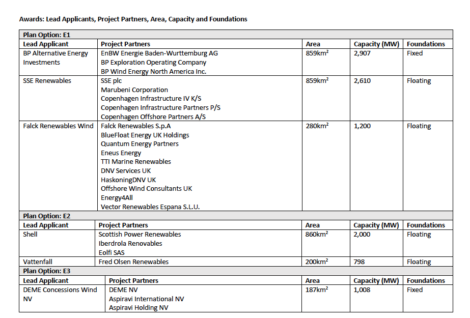 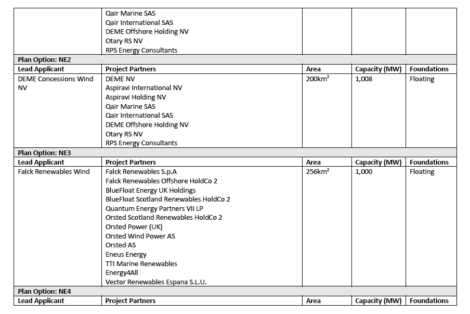 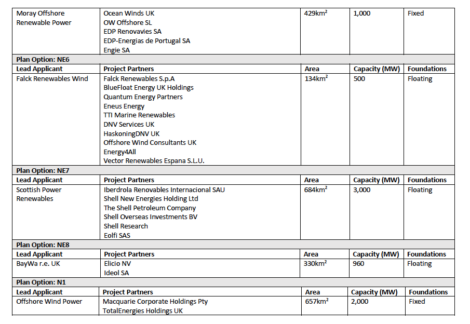 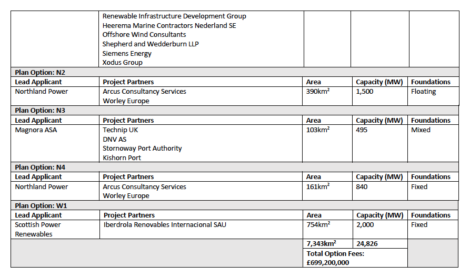