SHETLAND Fishermen’s Association (SFA) has again called for “urgent research” into offshore wind development’s impact on the industry after developers were announced for three sites to the east of the isles.

Meanwhile Shetland Islands Council said it will work with all associated parties to “ensure they maximise the benefits to Shetland and its community”.

Earlier today (Monday) Crown Estate Scotland announced that three sites to the east of Shetland are in line to be developed into floating offshore wind farms.

The total output could be up to 2.8GW, with green hydrogen a potential by-product, and the total area covered by the three windfarms could be 560km2.

The three lead developers are Ocean Winds, Mainstream Renewable Power and ESB Asset Development. It will be a long process, with consent and planning phases still to come.

It is part of Crown Estate Scotland’s ScotWind leasing round, which enabled offshore wind developers to compete for sites in waters around the country.

With 20 sites now assigned to developers, significant revenue is set to come to the Scottish Government as a result.

The area to the east of Shetland – named NE1 – initially did not secure a successful bid, but a ‘clearing’ round was recently held to offer a second chance. 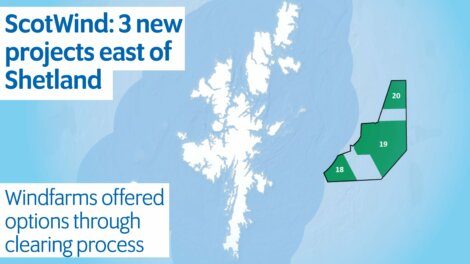 The local fishermen’s association has repeated its concern over the impact of development east of Shetland, and responding to the news Lawson said the industry should not be displaced.

“The impact of these projects on nursery grounds and spawning sites is unknown, and research is urgently needed before productive and pristine fishing grounds are destroyed in this offshore windrush,” he said.

“It is clear to everyone that more renewable energy is needed, however fish is a low carbon source of nutritious protein food – displacing legitimate fishing activity is environmental madness.

“These and other wind farm developments will have an impact on ecosystems and therefore on fish stocks and fisheries in the area.

“Unlike the offshore windfarm sector, fishing relies entirely on the good state of marine ecosystems for its survival.

“The Scottish Government is effectively privatising areas of seabed which are critical to our local economy here in Shetland, for the benefit of Irish, Norwegian and French/Spanish multinationals.”

Lawson added that it was imperative for the impact of any projects that do proceed to be minimised, especially through joined up cable corridors to protect inshore fisheries and mandatory tension leg mooring systems so that turbine anchor lines take up less space.

Meanwhile a spokesperson for Shetland Islands Council said: “We are glad to see that the ScotWind clearing round process has moved quickly and Crown Estate Scotland has come to a decision earlier than anticipated on the seabed agreements for the NE1 site.

“We will be working with all associated parties to understand their intentions for these offshore wind projects to ensure they maximise the benefits to Shetland and its community.”

Crown Estate Scotland marine director Colin Palmer said this morning that it was a “fantastic result for Shetland and for Scotland” in the drive towards net zero, while the supply chain is set to benefit too.

Two other large offshore wind projects around Shetland have previously been mooted; Cerulean Winds is proposing to install 200 wind turbines west of Shetland and in the central North Sea, which would power a hydrogen plant at Sullom Voe.

Meanwhile a huge 500-turbine wind farm was proposed 90 miles to the north of Shetland.