A TRIO of siblings are taking on a half-marathon to raise money for charity in honour of their dad, who was diagnosed with a rare terminal illness last year.

Kara Thomson and her siblings Kelly and Darren have already raised nearly £5,000 for the MSA Trust ahead of the half-marathon at the end of May. 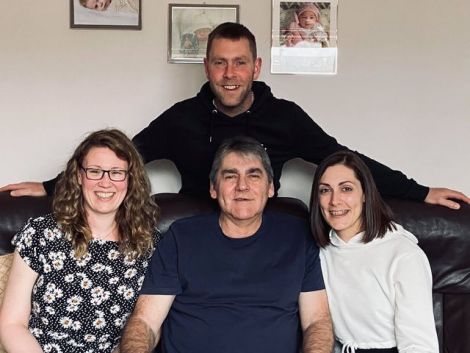 From left to right: Kelly Thomson, David Thomson, Kara Thomson, and Darren Thomson at the top.

Their dad was diagnosed with multiple system atrophy, a rare condition of the nervous system that causes gradual damage to nerve cells in the brain, in October last year at the age of 65. It has no cure, and no known cause.

The siblings will take part in the ‘virtual’ Edinburgh half-marathon on 30 May with a route in Shetland covering around 13 miles.

Kara said they are “totally blown away” by the amount they have raised so far, which has smashed the initial £1,000 target.

More fundraising is taking place, including his niece doing a skydive in mainland Scotland.

Kara said multiple System atrophy is a terminal neurodegenerative disorder, which affects the nervous system which controls blood pressure, digestion, bladder and bowel control, which general movement is impacted too.

“There’s no cure, and there’s no medications for it, because it’s such a rare illness,” she said.

“They’re currently studying now to find a cure and why people get it. There is only one charity in Britain that supports this, the MSA Trust, and they have been amazing.

“They’ve been such a good support network for my dad, my mam, my siblings. Doctors, and even dad’s neurologist, they’re not very familiar with the illness, so they’re having to treat every symptom individually.”

Kara said the fundraising idea came about because the siblings wanted to do something to show him support.

“We’re there for him, and we do as much as we can, but we thought let’s raise money and try and do this for him,” she said.

“It was quite emotional when we told him at new year we were going to do it. None of us are runners, so it is a bit of a challenge.”

It seems Kara is getting used to the running lifestyle, having completed a 10k jaunt on Thursday morning.

“It’s great for our emotional support to each other, and our mental health as well with what’s going on,” she said.

People can donate to the fundraiser here.