THE DEPUTE leader of Shetland Islands Council has reiterated his belief that moves should be made to try to take control of the isles’ external ferry link in-house.

Gary Robinson said he would like to see any future contract “defined in Shetland by the people who will use it”.

And he said it seemed a “little crazy” that during the last council term members did not use the Scottish Government’s islands act to request additional powers after voting to explore greater self-determination.

It is through this act that Robinson believes there is a possible vehicle for taking control of external ferry services in-house.

He also said a lot of island communities in Europe and further field already have a say in the provision of their ferry services. 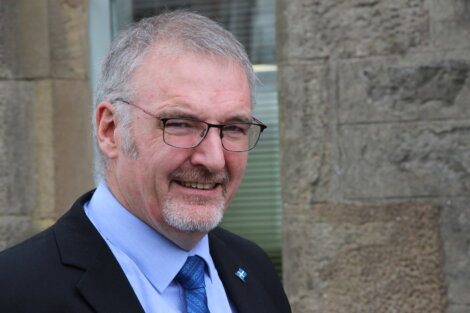 “What we’ve got in the islands is not normal – I think we’ve become accustomed to it,” he said.

The £450 million contract includes passenger and freight services between Lerwick and Aberdeen, as well as Kirkwall in Orkney. It is due to run until 2026, but there is an option for a further two years.

The capacity of the boats used on the service has caused grumbles for years, and things appear to have a reached a boiling point in recent months.

This is the case for both the freight boats and the passenger ferries in peak periods.

Robinson said among councillors there is a “real feeling that the current system isn’t working”.

He also claimed that islanders do not get a “huge amount of say” when Transport Scotland consults on the ferry contract.

“It’s a bizarre way of defining a service,” Robinson, a former SIC leader, said. “I just firmly believe we could do better if that was devolved to the islands, and we could engage better with the folk that are using the service.”

Two replacement freight vessels set to come into service in 2026, which are likely to have extra passenger cabin space.

But the Lerwick North and Bressay councillor also said he was concerned that the ship size and whether it can fit into Aberdeen Harbour is the “main metric that is being used”.

“If Aberdeen is going to be a constraint on future service, then I think that needs to be looked at and addressed now, rather than building ships to fit Aberdeen Harbour only to find that the capacity has been reached again within a few short years,” he said.

“I think we need to urge Transport Scotland at this point to take a service first approach to it, understand both the passenger, freight and car demand that’s going to be there, and how that’s going to grow in the future, when they’re defining the service.”

His idea of devolving control of the external ferry service to the council does not mean there would be a “Shetland Calmac”, however.

“That first step is just being able to control the service – first of all devise the contract that works for the islands, and then let that contract and oversee it,” Robinson continued.

“But the next step might be to see what other players were in there and in the market to run the service.”

Transport Scotland was contacted for comment regarding the idea of devolving control to Shetland but said it was a matter for the council.

No reason to review the decision to remove islander discount, NorthLink says