COUNCIL leader Steven Coutts says he is looking to engage with the Scottish Government to find out what exactly this week’s announcement on easing coronavirus restrictions will mean for Shetland.

On Tuesday the first minister said that the islands currently in level three – such as Shetland – would have the “option” to drop to level two on 26 April once the tier system returns, with discussions due to be held with island communities around the idea of possible travel restrictions to the mainland as a trade off.

But it appears this could be a different level two than what is currently in place, with the modified tier including household socialising – unlike the existing level two.

Hospitality venues could be set to open until 10.30pm indoors with alcohol permitted, which is also less strict than the current level two. 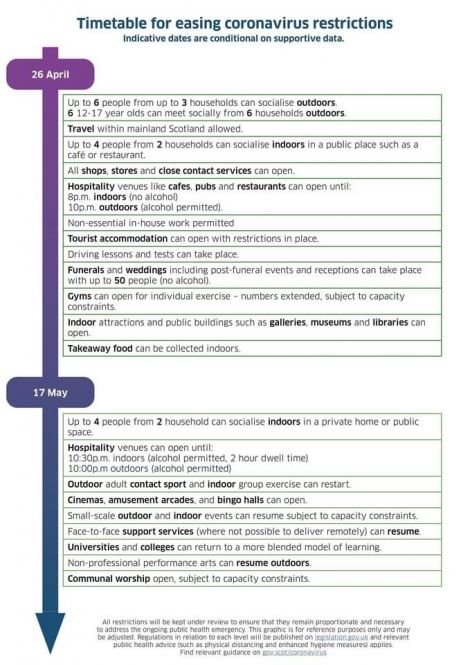 Nicola Sturgeon suggested the measures from 17 May would form part of a new level two.

The timetable published by the government on Tuesday effectively covers the new level three and level two, with a more detailed table with level one and level zero due shortly.

From then the whole of Scotland should be in level one at the start of June before going to level zero at the end of the month.

Coutts said that he is keen for the council to have a role to play in upcoming discussions with the government, adding that he will make contact in the coming days.

“I think what we’ll be doing is writing to the government just to understand what the first minister’s statement actually means for us, because we’ve not had nay dialogue with the government since Christmas,” he said.

Coutts said the council has had “no clarity” from the government on the new levels system.

Meanwhile local MSP Beatrice Wishart has today written to island minister Paul Wheelhouse seeking clarity on the lifting of restrictions after no government contact had been made with local authorities.

She wrote: “The First Minister was emphatic in her statement that this consultation would be to the benefit of these communities. In the days that have followed, however, the lack of clarity about the consultation process alongside radio silence reported by island councils gives cause for concern.

“I raised this during this morning’s Covid-19 Committee session and the response did not provide any indication of consultation timescales. This continued lack of clarity is deeply concerning.

“As the minister reportedly in charge of this process, I ask you to urgently share further detail on how you propose to engage with island authorities, and what timeline my constituents can expect this process to follow.”

A Scottish Government spokesperson said discussions will be held with island communities to find solutions which fit their circumstances, “rather than imposing any decision on them”.

“As the First Minister made clear, we are getting the virus under control, but it is still dangerous, and any easing of restrictions must be balanced with the current state of the virus to prevent it running away with us,” they said.

“All of the dates published today are dependent on the data, and we will be monitoring the effect of the current easing on cases closely as we discuss with island communities what arrangements they consider will work best for their circumstances, rather than imposing any decision on them now.

“We have engaged with island communities throughout the pandemic but must allow time to gather data on how the easing announced today affects cases, as it will be crucial to any discussions of further easing.”