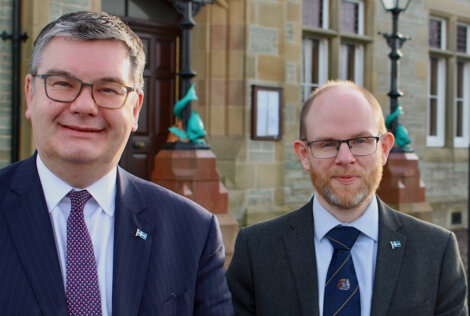 The council was knocked back last year in the first round of the UK Government’s new £4.8bn Levelling Up fund for a replacement ferry and associated harbour works.

But speaking after a meeting with UK Government minister for Scotland Iain Stewart on Friday morning Coutts said the council is set to try again.

“Our expectation is that we will resubmit that bid in the future round,” he said.

“We are very hopeful that the minister took on board the real necessity to address that Fair Isle ferry link.”

Coutts described the meeting with the Conservative MP as constructive – with the council pushing the case for investment across a range of areas. 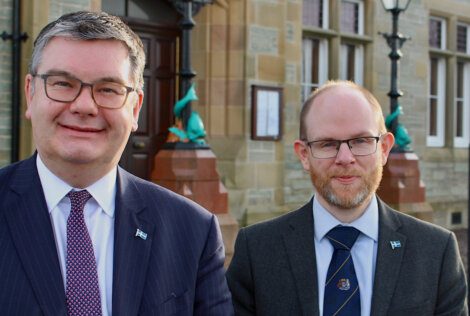 Among the discussion topics was fixed links for Shetland, which has risen up the political agenda again in recent months.

On Thursday Stewart headed up to Unst on the council ferries to visit the SaxaVord Spaceport team – an island which is at the centre of the fixed link talk.

“In the context of transport connectivity, the minister experienced first hand the challenges of ferries up to Unst,” Coutts said, “and again I’m hopeful we can have further conversations on the potential for fixed links across Bluemull Sound.”

Coutts said the council made it clear to the minister that there are a lot of opportunities in Shetland.

It comes after the UK Government published its Levelling Up white paper earlier this month which sets out plans to spread “opportunity and prosperity” to all corners of the country.

“We need a little bit of support to make sure we get a just transition in terms of the oil and gas to renewable energy, so we need to retain the jobs,” Coutts continued.

“We do need to find a way to address the fuel poverty issue in Shetland.

“We pay the highest rate of electricity in the country, so we need to recognise and solve that.”

An interview with UK Government minister for Scotland Iain Stewart will follow.