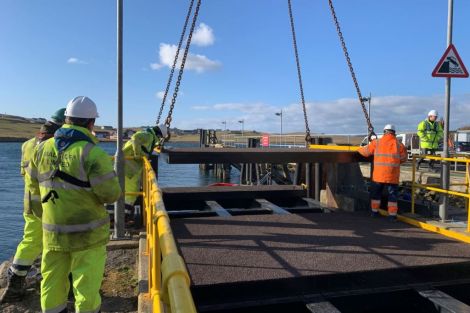 One of the new deck panels being lowered onto the frame of the Vidlin linkspan in April this year. Photo: SIC

PLANS to refurbish the Whalsay ferry linkspan at Symbister have been pushed back until next year due to difficulties sourcing the necessary materials.

Members of Shetland Islands Council’s harbour board heard on Wednesday that refurbishments at Vidlin and Skerries were carried out in April and May as planned.

But work intended to go ahead in Symbister in September will not happen until 2022 due to contractors Malakoff being unable to source materials including steel.

Ferry operations and port infrastructure manager Andrew Inkster told councillors that staff were working with the Malakoff to draw up a new programme taking the delays into account.

While the materials should be available by November the weather risk is “much too high” in the winter so the work won’t commence until the spring.

“There will be disruption to the island and we want to minimise that,” Inkster said.

The department is still “playing catch-up” due to a legacy of restrictions imposed as a result of the Covid-19 pandemic, Inkster continued.

He said there had been good progress on some other capital projects, with the new Toft Pier having opened in May albeit with a formal opening postponed.

Progress in maintaining the Sullom Voe Terminal jetties has been good, with the focus currently on the jetty two berthing and mooring dolphins, though Covid-19 restrictions “remain a threat to this and other projects”.

Meanwhile, councillor Allison Duncan voiced his concern that waiting rooms and toilets at some of the SIC’s ferry terminals remain unsuitable for disabled people.

Duncan said he was “very concerned” given he could recall the issue being highlighted as “urgent” by the council’s audit committee during the 2007-2012 term.

He said it may now be necessary to commission a further report to ascertain why, almost three council terms later, the matter had still not been addressed.

On a recent visit to the terminal at Toft, she was “pleasantly surprised by the state-of-the-art thing that we have there”, adding she was sure officials would be happy to update members about the wider picture.

Inkster said good efforts had been made to improve a number of the facilities, but conceded he could not “hand on heart” say they were all up to scratch yet.

Council elections underway as voters head to the polls