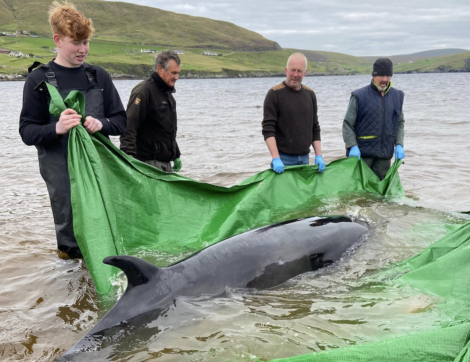 THE SHETLAND community – and some visitors – rallied together this morning (Wednesday) to rescue a minke whale which had become stranded on the Levenwick beach.

The young whale, which was around three metres long, eventually swam out to sea after being refloated.

NatureScot marine mammal advisor Karen Hall was one of those involved in the rescue operation, and she said it was an “absolutely phenomenal effort”.

She said the call first came in at around 7am, with the whale presumed dead.

But Hall said she was surprised to find the whale was still alive. 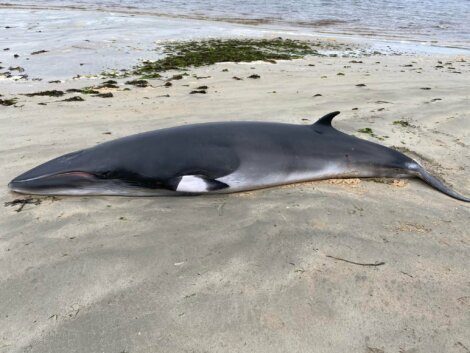 “Lots of phoning later and we had a concerted group of Levenwick and nearby folk ready and willing to help plus a couple of visitors who happened to be holidaying in the village,” she said.

“The initial assessment looked good – it was a young minke in good body condition with no obvious injuries.”

A tarpaulin was used to lift and drag the whale towards the water. Hall said efforts were made to keep the whale steady, as stranded whales need time to “regain their equilibrium”.

The whale swam off, but only to a kelpy outcrop, with the rescuers back in the water again to move it off.

“Gradually it got stronger and began to turn itself when it approached the shallows, and then it was off,” Hall said.

The wildlife expert thanked all of those involved in the rescue effort.

Not all heroes wear capes.

Phenomenal effort by @kazcustard, the @wildathillswick team and the local community to refloat this live-stranded juvenile Minke Whale that beached itself at Levenwick, Shetland this morning.