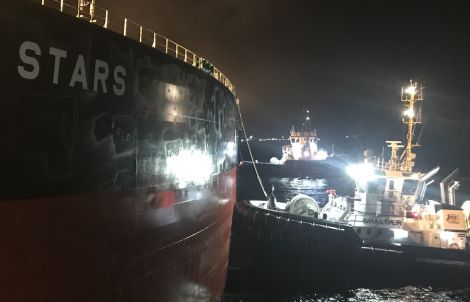 OIL export from Sullom Voe Terminal could be disrupted from the middle of next month after union members working on the harbour tugs voted overwhelmingly in favour of industrial action.

Following a ballot earlier this month Unite Scotland confirmed on Tuesday that 87 per cent of its members voted to take strike action.

The dispute with employer Shetland Islands Council is over a long service award, which the union says its members are entitled to receive.

The council has previously said that the contracts of the tug men come under a TUPE agreement, reached in 2006 when the tug service was transferred from Shetland Charitable Trust owned Shetland Towage to the SIC.

That agreement stipulates a £250 flat rate as an award for 25 years of service rather than the equivalent of one month’s salary other council workers are being paid.

Unite industrial officer John Boland said: “Unite members have overwhelmingly voted to take strike action to rectify the injustice being done to them.

“Our members in the Shetland Islands Council towage service just want to be treated fairly and the same as any other council employee, and that means they be given the long service award for the same dedication to their jobs.

“We will now prepare to serve strike action notice, but hope that Shetland Island Council will come to their senses and resolve this dispute.”