I read something the other day which made me laugh: “April 1: the only day of the year that people critically evaluate things they find on the Internet before accepting them as true.”

Funny, but something I’m sure we can all agree is in fact the case. Why so? Because we bring what knowledge we have (or don’t have) to every situation. Our knowledge of April Fools’ Day affords us some criticality that the other days of the year perhaps do not. It forces us to ask: Does truth matter? 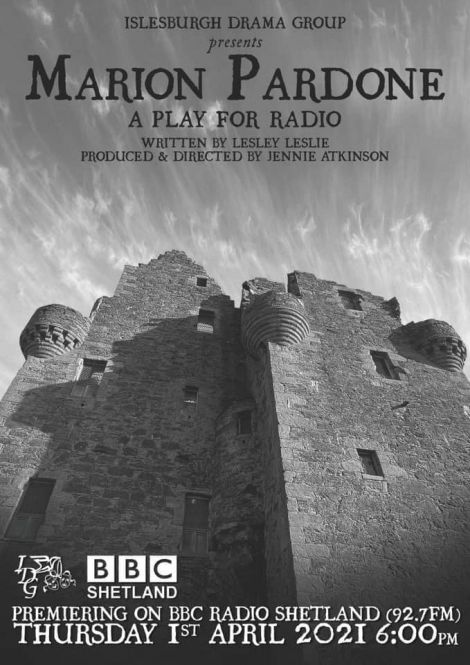 So, in listening to the radio play Marion Pardone by local writer Lesley Leslie, performed by Islesburgh Drama Group, these were the same words that struck me.

Set in the 17th century, the play is a cautionary tale which surely shows us that, despite the span of centuries between then and now, much about the human condition remains unchanged.

Marion Pardone is the fictionalised story of a local woman who, in 1644, was executed due to being found guilty of witchcraft. Reminiscent of Arthur Miller’s The Crucible (another play performed historically by Islesburgh Drama Group), it follows the interrogation of Marion upon her arrest.

Similar themes emerge: rumour, fear, power and corruption – the very things that in the 1950s Miller used his play to commentate on in American politics. Here we are 70 years on, asking ourselves the same questions – do we still lack critical thinking when it comes to how we perceive others and their situations?

Of course, we are not likely to be hanging people for meddling in witchcraft – this theme is of its time. As Leslie says herself “with the knowledge we now have all these accusations would be laughed at”. But the wider themes are timeless, as Marion Pardone points out.

The play opens with a moody atmosphere, fiddle music playing and setting a scene and tone to the ensuing conversation. Low, dark conversations beginning “have you heard of Marion Pardone?” instantly informs us that the women we hear are gossiping.

Nameless voices, repeating what they have heard or picked up reveals the nature of how rumours abound and are spread. When juicy titbits are gleaned how is this information passed on? The play does well, considering there are no people to watch in behaviour or manner, to help the listening audience fully understand that this is hearsay – and that the community is rife with it.

Interestingly, the original play written by Leslie was for the Shetland Drama Festival and was supposed to be very visual – adapting the play for radio, in collaboration with director and producer Jennie Atkinson, meant that instead of visual elements the production relies much more closely on voice, intonation, dialogue…all of these adaptations were superbly made and from the outset we are left in no doubt as to the situation and circumstances of local gossip doing the rounds.

If anything, it is a surprise to learn that these conversations were conducted over Zoom with the cast sitting in bedrooms, or other quiet spaces in their homes to record their lines.

Scenes have been separated by the same fiddle music, an excellent choice as it continually reinforces the period of history as well as the tone and mood of the play. It was chosen specifically to help tell the story of Marion Pardone. Other sound effects are few and far between, although in fairness they were not necessary either. Clanking chains, inclement weather and horse drawn carts were sufficient in anchoring some of the key details – instead the dialogue drove the story home.

Considering she had been arrested on suspicion of witchcraft, we might be surprised to hear Marion’s voice, played by Mandy Phillips. At first, she comes across as assertive and sure of herself, indignant even at the ridiculous nature of accusation being levelled at her.

We so often associate witches with the caricature – the raspy voices, the other-worldly intonation perhaps. Not so with Marion – my first thoughts were that she had strength of certainty and character. Phillips presented her as educated and knowledgeable – she had explanations for everything that was asked of her. But at the end of the day, those in power wanted to hear what they wanted to hear. The truth didn’t really matter at all. 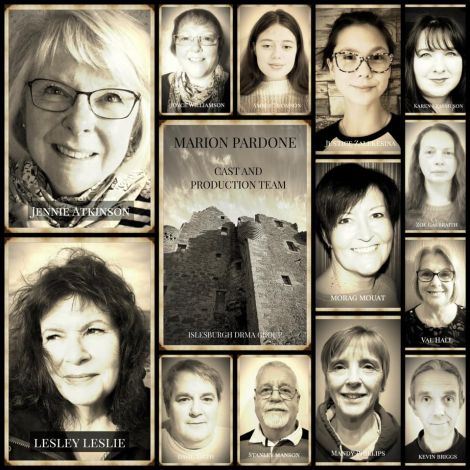 In fact, one line by the churchman summed the whole situation up – he was after her answering “questions to [his] satisfaction”. The problem wasn’t satisfactory explanations – the problem was the desire for a specific outcome. Again, we are caused to ask – does the truth matter? Or is truth open for interpretation?

The play also reminds us, through the dialogue, of the superiority at the time of church and class and the ways in which women were represented – and indeed misrepresented. Although the twist at the end does well to remind us that you should never underestimate the intellect of a woman!

The passage of time is marked by fiddle music again – the return of chattering voices were a great insertion here, summing up the never-ending circle of hearsay and gossip as one woman recounts that she had “heard she [had] confessed to everything”. The echo of “have you heard” at the start reinforces again how this play isn’t really about the search for truth, but about hearing what version of ‘truth’ we want to hear.

But as time passes, and we revisit another interrogation of Marion, Phillips reveals well through just her voice the toll it was taking on her. The line of questioning, just the same and as ridiculous as before, shows how the relentless pursuit of a desired outcome despite the truth of the matter can lead to devastating conclusions.

The judge issues a sentence over a more furious frenzy of fiddle music which heightens the tension. While we likely saw this coming – all the other clues indicated the downfall of Marion well – we are no less indignant at the outcome. While Leslie herself says that today “any lawyer worth his salt would have got her off”, we see that fear, rumour and corrupt power were as prevalent then as they surely are now.

The real surprise is the ending, however. It turns out that Marion’s downfall was orchestrated entirely by the sophisticated scheming of Lady Eleanor, played by Morag Mouat, who was exerting her control over her husband who seemed to know no better.

Now the play is more reminiscent of Macbeth where we see in Eleanor a woman not so different to Lady Macbeth. All of the rational explanations for the alleged witchcraft that Marion had so tirelessly explained away were, in fact, rational explanations. Rather, it was the scheming of a power-hungry woman and the moral failings of her ill-educated husband that really led to Marion’s death.

And so the play becomes not just about truth, but about education and knowledge. In this case, “good animal husbandry” and knowing how to “read the signs of weather” were instrumental in Lady Eleanor’s plotting. She was educated enough to know the truth from a lie, to know how to use that knowledge for her own gain and to know how to manipulate others in to thinking what she wanted them to think.

Leslie has expertly taken events from history and created a drama that, despite its historical themes, still has a modern resonance. The cast were fantastic at conveying their various characters of the time – from Phillips’ portrayal of truth destroyed by the system to Mouat’s portrayal of power and corruption.

But, we will see falsehood, gossip and circumstances we don’t understand. It’s not that these things across the passage of time have disappeared, but rather – as Marion Pardone has taught us – what educated criticality we bring to situations when they arise.

Bravo once more to Islesburgh Drama Group whose commitment to bringing the arts into our homes in an ongoing time of global crisis is to be welcomed and applauded.