A FUNDRAISING calendar featuring photos of an adventurous cat known for his roams around Lerwick shops have been selling well – and across the world too.

The 2023 Adventures of Tommy calendar has been sent as far as America, Australia and Malta.

Tommy’s human companion Maggie Sandison said there are low stocks of the calendar in Universal Stores, Love from Shetland, Boots, Specsavers and Harry’s. 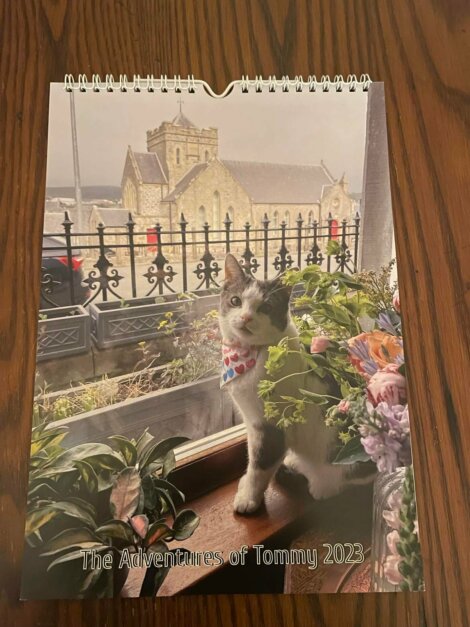 “We sold more and faster this year with 35 being posted all round the world on the first day compared to 18 last year.”

Sales from the calendars will support Shetland Foodbank as well as the local Cats Protection and Shetland Cat Rescue.

Sandison said she was “delighted” with the calendar’s success, especially with the feedback from his fans.

Tommy has been a regular visitor to shops and establishments in Lerwick over the last few years, and photos of his adventurous exploits began appearing on social media.

Some of the cat’s favourite haunts recently include Boots and M&CO – while he is also known to enjoy a visit or two to the Thule pub.

Tommy’s Facebook page now has more than 5,000 ‘likes’ from people across the globe.

Anyone interested in buying a calendar can get in touch through the Adventures of Tommy Facebook page.

Blade receives medal for services to the community

More organisations in line to receive funding from charitable trust