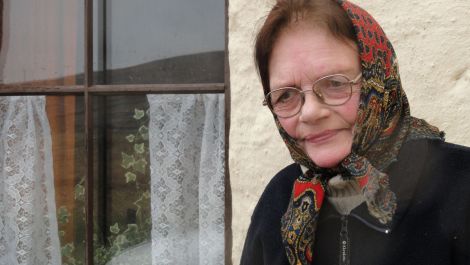 TRIBUTES have been paid by one of the local groups opposing the Viking Energy wind farm to Lottie Robertson, the sole resident of the Half Way House, who has died aged 92.

She was found by police officers at her home last Monday after concerns were raised.

Living in one of Shetland’s most distinctive and iconic domestic settings, Lottie found herself in the centre of the raging controversy over the pro and cons of the wind farm development.

As a very private person she never participated actively in the debate, but donated regularly to Sustainable Shetland, and spoke of her distress, helplessness and feelings of being threatened by the wind farm development when Shetland News visited her in April 2012.

More recently, members of Save Shetland have been in touch regularly as well as Viking Energy.

Group member Ernie Ramaker said: “Save Shetland are very saddened to hear of Lottie’s passing. We visited on several occasions, and she was a lovely, private person.

“We extend our sympathy to her family.”

Lottie had stayed at the Half Way House for more than 70 years after she had moved there with her parents in 1949. The location at the entrance to the Lang Kames once served as a wayside inn and was also a venue for a cattle and sheep market.

A spokesperson for Police Scotland said: “We received report of concern for person at a property in the Sand Water area of Shetland around 12.40pm on Monday, 18 October 2021.

“Officers attended and the body of an 88-year-old woman was found within. The death is not being treated as suspicious and, as with all sudden deaths, a report has been sent to the procurator fiscal.”

Note: We updated this story after a family member got in touch to tell us that Lottie was 92 years old and not 88 years as stated in the police statement.