THE FIRST turbine components have begun arriving in Lerwick for the Viking Energy wind farm construction.

In what is regarded as a milestone for the project, the equipment – nacelles, hubs and drive trains – has been brought to the Greenhead Base on board the cargo vessel BBC Ruby.

A spokesperson for turbine company Vestas confirmed to Shetland News that the components are now being stored.

Meanwhile preparations are continuing for the delivery of large turbine parts to the Viking Energy site on the Shetland mainland. 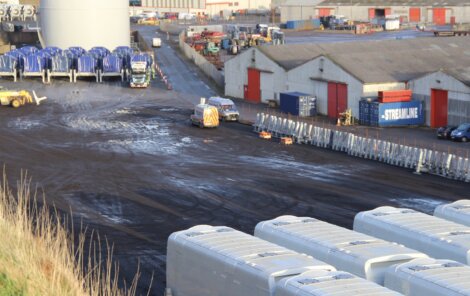 They are stored at a lay down area at the base.

A planning condition regarding road safety and abnormal loads is in the process of being discharged.

The large blades – which span nearly 60 metres – and other pieces of turbine equipment would be taken north to the site by lorry.

In response to the request to discharge the condition, the council’s road service said: “The movement of abnormal indivisible loads associated with the Viking Energy Windfarm have been the subject of significant dialogue with all stakeholders and a detailed movement plan, which is fully supported by all involved.”

The route would see the large loads be driven through the Central Mainland along the A970, with site entrance points at Sandwater and south of Voe. 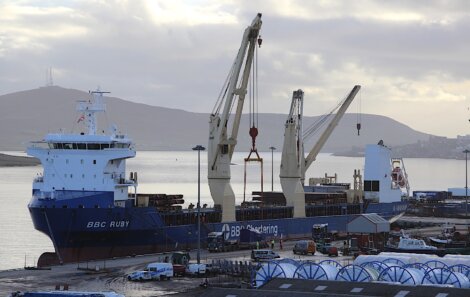 The BBC Ruby at the Greenhead Base.